I shall be working in Montréal today.

'shall'?  Yes, Georges and I have been working on some T&Cs lately so my mind is quite in tune with the subtleties of grammar and the precise message conveyed therein.  You hip?


I chose the wrong line at security today at Pearson, initially I was heading for the lower security but it was terrible full so I ran up the stairs to the main departure level and was met with similar sized and intensity lines.  I chose quickly.  Damn.

The line I chose had the lowest number of individuals outside of the wall, but inside..  the dreaded family of four.  Not near as much fun as China's Gang of Four (1966-76, too obscure?), but just as much a security problem.

'Oh come on!'. Who in today's age of heightened airport security doesn't know that you can't bring 10 bottles of water with you through security, or 3 toy guns and a Happy Fun Ball?  Strange..  each had a significant amount of assorted change in their pocket --these may have been the Coin-Op Laundry Bandits!  Have rodeo-hero belt buckles come back into vogue?  The absurdity rose to absolute heights when it was revealed that all four members, mom, dad and the two kids all had piercings, ranging from the typical ear-rings to the atypical nipple rings, belly, nose, lip, and I am only theorizing....  the dreaded scroti-orno-ments!

Bleeweep!  The handheld wand yelled out to its raised eyebrow female holder...  'Need a male screener!' she called out.  'They don't come out' the dad-traveller volunteered, 'WASN'T ASKING!', she blurted back.  My right eye developed a bit of a nervous twitch.

Finally made it through, and raced off to my gate.  Now we sit here just 75 meters or so from gate 22 with a small computer glitch, we'll know in just a short number of minutes if it is cleared.

Which brings me to today's intended topic.   This Saturday is International Coffee Day!

Hey, bet you didn't know that prior to OPEC (Organization of the Petroleum Exporting Countries) the Arabia was in the coffee racket? Yep, the Arabs even imposed strict bans on the export of fertile coffee beans.

Long before Juan Valdez carried on his illicit love affair with his mule, Conchita, coffee was being grown in Africa originating in the Ethiopian province of Kaffa and then it was cultivated in Yemen and exported through the port of Mocha, with the aforementioned ban on fertile beans.

And then came the Dutch.  They brought beans back to the Netherlands in the early 1600s where they were grown in greenhouses and then it was also the Dutch that brought coffee to South and Central America in the early 1700s. It was there in Columbia working tirelessly for the National Federation of Coffee Growers of Columbia that that lonely Cafetero Juan met the lovely Conchita under a harvest moon.  It was love at first bray.

The man on the radio had alerted me to notable event of this Saturday and went on to list the set of occupations that drink the most coffee..

Working in Ottawa today --Slipping off a sliderule

I will be working in Ottawa today.  As promised.  Kinda reliable that way aren't I?


Yawn.  I am still a bit on Barcelona time, being already about 3 PM there, I feel like knocking back a sangria and having a bit of a siesta.  Oh well, back to routine.

Hey, before I dive into today's topic (not sure what it is yet) a word on Antoni Gaudi.  Gaudi was a architect working in Spain during the turn of the last century.  He was a foe of the straight line and imbedded paraboloid, hyperboloids and helicoids into his designs as well as incorporated a rich mixture of building materials.

The first structure of his that we saw was the Crypta de la Colònia Güell.  Yeah.  When I looked over the crypt and the varied building materials and the seriously unconventional design I said to Sharlene, "I think ol' Antoni slipped off his sliderule.". But when we went to the Sagrada Familia (still under construction since 1882!) and we looked up from inside at the hyperboloid vault of the main ceiling I was in awe of his brilliance and attention to detail and his ability to make the transformation from unbridled imagination into a reality.   Really quite amazing.

This may be interesting or amusing to you, while swimming in the Mediterranean at Costa Brava I encountered a fluther of jellyfish.  During my attempt to hastily swim backwards away from them I was stung on my foot.  Not really that bad, much like a bunch of bees stinging you but without the buzzing.

I swam back to the beach, which worked well as the swimming cleaned off any of the strands that invariably are present and continue to sting one's self, to where Sharlene and Daisy (a gal from San Francisco that Sharlene and I met on the bus and shared lunch with us) were sitting.

Both recalled the 'Friends' episode where Monica had been stung by a Jellyfish and Joey stepped up the plate and relieved her suffering by relieving himself on her leg.  However in a act of selfishness, neither offered to perform the same act on my foot.

Just as well,  it would have changed the whole relationship.  I'm sure it would be hard to look at a person the same way after they pee on your foot.  In the end, I just manned up and walked it off.

Have a good day --a special shutout to Christine, Happy Birthday!
Posted by Daniel Puckett at 09:15 6 comments:

I will be working in Ottawa today.

From the "I just can't make this stuff up" department, a dance and fitness studio in Duncan, BC (about half way between Victoria and Nanaimo on Vancouver Island) has launched its 'Little Spinners' pole dancing program to prepubescent girls.

<For the uninitiated, please see the online urban dictionary for the definition of Spinner.>

Kristy Craig aka House Madam Kristy says that she is just responding to her adult client's demands.  She neglected to describe exactly who these adult clients were, but went on to explain that pole dancing is a sport that is being stripped away from its gentleman club roots.

Further, she said that at some competitions (some) (that suggests that there are competitions where the following does not apply) girls aren't allowed to wear high heels or remove any clothing articles.

Meanwhile in Vancouver, former exotic dancer Tammy 'The Punisher' Morris and Tantra Dance studio owner also has classes for the prepubescent, and doesn't understand why everyone associates pole dancing with stripping.

In other news, Sharlene and I are headed for Spain in another day or so!  We also plan a day trip to Andorra.   Andorra is a small land-locked Principality nestled in between Spain and France.  For you Star Trek fans, it is also the homeland of the Andorians, those white haired, blue skinned peoples with the antennae coming out of their heads. 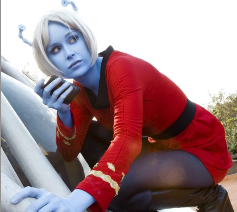 Kind of funny those Andorians, the pale blue skinned females are strangely sexy in a taboo kind of way, but the dudes are just downright weird looking

Yeah, The Andorians were actually from Andoria which orbits a gas giant in the Procyon system.  Andoria's surface is icy and rarely thaws.  There are reports of a second home world in the Epsilon Indi system, but a true Trek expert like Dennis Hayes would have to confirm.

Andorra on the other hand has about 85k earthlings in residence and have the forth highest life expectancy at 82 years.

Only have about a minute left before they ask us to shut our electronics for landing,  so there is no time to enter a lengthy discussion about the differences between Empires, Kingdoms, Principalities and Duchies.  But real quick, an Emperor rules an Empire presiding over many Kingdoms.  Kings run Kingdoms and may owe allegiance to an Emperor.  Princes and Dukes run their smaller Principalities and Duchies and owe allegiance or fealty (feudal duties) to a King.

In Andorra's case that fealty was to the King of France, currently to the office of the French President.