O Canada! Our home and native land!
True patriot love in all thy sons command,

God keep our land glorious and free!
O Canada, we stand on guard for thee.

O Canada, we stand on guard for thee. 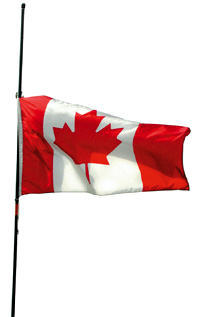 Good morning folks,
I will be working in Ottawa today.
Very little that occurs in our life is interesting to others.  Take this Pulp, I am awake somewhere around 1080 minutes per week, less if I get a Saturday afternoon snooze in.
During that time I spend about 20 minutes writing this Pulp.  And it is barely interesting, most of you read it out of sheer politeness.  The things that occupy the other 1060 minutes per week of my life may cripple you into a paralyzingly ennui.  The minutiae (for those that care, minutia is a single trivial item, minutiae is a collection of trivial items) of our daily lives is just not suitable for sharing..
Yet, sales of GoPro cam (video camera designed to record events from your first person perspective) sales are higher than ever!  Today in the airport a fellow cruised past the flight info screen near lower security with a GoPro strapped firmly to his face.  Now this did not appear to be the work of Joe survey dude, no, just some guy that must assume that his ordinary coming and goings will be interesting to his friends and family and his Youtube family of followers.
I can imagine him home at the end of the day with his wife and children forcing them to watch the footage.. his wife in a near catatonic state thinking that alcoholism may be a viable option and his children crying, no daddy I don't want to watch anymore, I'm sleepy -- You will watch it and enjoy it, look, here I am walking past the shoe shine guy, everyone wave.
What?  Uncle Daniel, that is all that you have today -- How about some further editing of the minutiae?
Yeah, sorry about that.  Was up a bit late writing some contract mods and used up all of the really good words.
But in apology, I bring you two of my favorite Hallowe'en jokes.
What do you get when you divide a pumpkin's circumference by its diameter?
ip nikpmup (backwards)
What is the favorite sport of the Smashing Pumpikins?
hsauqs (also backwards)
Have a great day.
Posted by Daniel Puckett at 09:07 6 comments:

Good morning folks,
It will be working in Montréal today.
This is a fluff piece.  No stark political accusations, no indictment of our path to a totalitarian dystopian future where the appliances all speak to each other but the people do not and where big brother tracks our every purchase, every book we read and every vote we cast.
No.  Not this time Mr. Goldstein, you get a free pass.
Instead.  A tribute to the new crack, my new crack.  The Flat White.
This is the brief story of my descendence into New Zealand coffee hell and the happiness I have found by being there.
A number of weeks ago while returning from lunch at the food court across the street in Toronto with Mel and Matt, Matt noticed a sign in front of Second Cup advertising a new coffee addition to their line up.  The Flat White.
Matt was immediately enthused.  He explained quickly that he had had Flat White coffee in New Zealand (or Australia, to be honest, I wasn't really paying attention at the time) and he hadn't found one on this side of the planet.
Sidebar.. New Zealand's island chain The Antipodes were originally called the Penantipodes, literally, Next to the Antipodes.    This was simply because New Zealand and Australia too were originally called the Antipodes by those in the UK as they are near the antipodal point of Great Britain (which would actually be just to the south in the Pacific Ocean).  Eventually the islands' name was shortened to simply The Antipodes.  I explained the whole thing in a prior Pulp devoted to the study of Antipodal points.
And we are back.  Btw, this stuff just pops into my head and for some reason not easily explained I feel compelled to explain and share with you.  Go figure.
Now that particular day I did not try the Flat White but did have a Espresso Macchiato.  Somewhat satisfying but kind of.. meh.   Matt had a Flat White -enjoyed immensely, and Mel skipped out entirely.
But the next day..  I partook.  Oh my.  I am now thoroughly addicted to the Flat White.
The Flat White is quite simple in its deliciousness.  1/3 Espresso.  But the espresso needs to be of sufficient quality and grind that it yields forth a nice layer of creama across the surface..  Creama is a rich thick foamy mixture of proteins and oils from the bean.  To this 1/3 espresso , 2/3 micro foamed steamed milk is added.
Not aerated milk with foam to perch on top of the coffee like a poorly fitted wig.. No.  But rather a steamed milk with very little air, just enough to make very wee bubbles.  And something else...  When the milk is steamed and brought up to about 120 degrees F., a bit of magic occurs.
The lactose which doesn't really taste sweet in milk at all, gets split into two sugars, glucose and galactose.   When this microfoamed milk gets poured through the espresso that mild and delicate sweetness is spread throughout the cup.
It is important to note, do not let the milk get close to 140, bad, terribly bad things happen.  All of the proteins in the milk become cooked, denatured, the sugar bind with the proteins, cats and dogs start living together in sin and it can lead to increased hair growth on the back of your hands and frogs raining down from your ceiling.  Don't do it.
As a final step, top the coffee off with a little bit of slightly more aerated milk (the stuff hanging around the top of your heating cup) for a bit of 'latte art', a leaf, heart, or my personal signature.. the squished mosquito.  That's right folks, I confess that my barista skills are left wanting in the art department.
In my effort to ensure a steady stream, an infinite availability of this Flat White concoction, I have begun a steady campaign of educating all coffee shops in the making.
The Star Bucks coffee shop in Watsonville, California can make a passable one, but really it's just a short wet cappuccino, and the MMmmmuffins/Timothy's across from the Toronto office received their first training yesterday with yours truly standing behind the barista counter steaming the milk and rolling it gently under the rich creama and of course if you drop by my house, I will make you one personally.
Have a great day, enjoy your coffee break :)
Posted by Daniel Puckett at 09:01 18 comments:

Good morning folks,
I am working in Ottawa today.
Question for the collective we..
Are we being shafted by the Coalition of the Vengeful?  Is that the name of the current war on Islamofacist terrorism?  Too many wars, so little attention.
The Harper gov't (the government formerly known as the Canadian gov't) is also plowing full speed into joining that war, I mean this war.  And folks, let me remind you, there is NO UN SANCTION for this war.  The last UN resolution on the matter condemned the violence, and called for member countries to control the flow of would be fighters from their countries into the conflict, but did not say, go do some bombing in foreign lands.
And just to add to the very confusing legal questions of inflicting a bit of air to ground vengeance on those that irritate us, a NEW ENEMY HAS EMERGED.

That right kids.. Introducing The Khorasan Group and their weapon of choice is the toothpaste bomb.  problem is, I don't think they exist.  At the very least they did not seem to exist prior to a week or so ago.  I cannot find ANYTHING ever written about them prior and the only reference anywhere is that there is a region of Eastern Iran and Northern Afghanistan that is known as Khorasan.  But bombing them has occurred without UN sanction and without any direction from the US or Canadian lawmakers, do we really want to play in a war where anyone that presents itself is a target?
It is an interesting strategy by the U.S., first engage in a war without Congressional approval (Congress is scratching their heads a bit trying to figure out if the Congressional vote in 2001 to invade Iraq extends to enemies of Iraq, many experts say.. Uh.. NO), then reveal the emergence of a new enemy (I think that makes 3 distinct groups, maybe 4).  Is it all meant to distract us and keep us uneven on our feet?
I think we may be being fed this by the shovel full.  The two supposed leaders of this organization were both reported as being already dead and according to the US, they are more dangerous than ISIL or ISIS or whatever the hell they are called.

Folks, you know what this means don't you?

Welcome to the new disinformation warz.  This group, of which information is so very thin, has been referred to by the U.S. as having as little as a few dozen members, although the U.S. Command and Control reported that they had bombed 8 Khorasan Group targets last week, training camps and installations.  Were these 3 man camps?  Has the entire organization been eradicated?

This group also reportedly are enemies of Iran or Iran is the enemy of the Khorasan, but in any event, does this mean that the U.S. is now in cahoots with Iran and is once again an ally?  Iran and the U.S. were real chummy during the Pahlavi regime between WW2 and the '79 Iranian revolution. But then again Eastasia has always been at war with Oceana, right Winston?

To fuel the current public opinion to support the new air strike war, the western media airs reports of the ISIL perpetrated beheadings over and over.  Now don't get me wrong, I not a fan of ANY group that beheads people and places their want for power ahead of the rights of other peoples, but just to remind everyone, the Free Syrian Army a current ally of the U.S. and soon ours beheaded 6 captives last month and Saudi Arabia beheaded 8.  Is this the behaviour we wish our brave Canadian lads to be associated with?
We can't bomb the shit out of someone under the rational that they behead people by partnering with forces that behead people at faster rates.  It all smells like BS to me and Obama, Harper and their ilk should be bringing the truth, the complete truth to their respective houses and let the people decide.

Have a good day.
Oh, and let's all keep hope and good wishes for the student protestors in Hong Kong as well as the Chinese officials and police.  Calm heads need to prevail on all sides and so far they have.
Peace out.
Posted by Daniel Puckett at 09:03 5 comments: